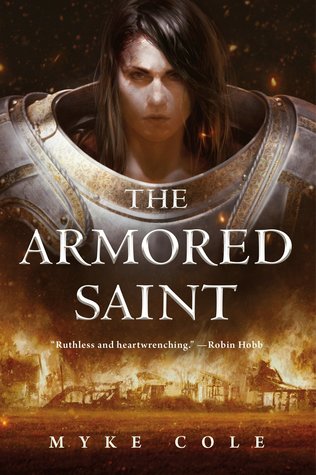 “See the portal? I’m a gateway! Hell comes through me! The devils will soon be here!”

I received this book courtesy of Macmillan-Tor/Forge in exchange for an honest review.

In a world where any act of magic could open a portal to hell, the Order insures that no wizard will live to summon devils, and will kill as many innocent people as they must to prevent that greater horror. After witnessing a horrendous slaughter, the village girl Heloise opposes the Order, and risks bringing their wrath down on herself, her family, and her village.

This gem of a book proved to me that you don’t have to write a massive book containing over a thousand pages to tell a good story, this novel clocks in at a mere 208 pages, some would say a short story, but I can tell you now this was one of the most intense books I’ve read this year.

This book is about a rebellious girl, who is in her teens, and at that age you think you can take on the world, the story deals with many things, the consequences of her rash actions lead to her village unifying in a situation they have no power over which was fascinating to read at times. This novel also touches on the innocence of love, we have all been there when we have feelings for someone but are too afraid to show them but when you do, you make a fool of yourself and you want to runaway from everything in embarrassment. But you get to see this young girl evolve into something magnificent in a mere 200 pages so trust me it’s worth the read!

Now I must mention the Order of Pilgrams, who hunt Wizards in the name of the Emperor, and they were awesome to read about, they arrive into the book like a bad smell but you can’t help but admire them. You can smell the fear on the villagers and taste their nervous sweat as they try to hide various things from the Order during the plot and this makes for some extremely tense encounters, I couldn’t stop flicking the pages.

The action, when it kicks off, is well written and the author made me sympathise with certain characters and made me think that magic wasn’t that bad, but by the end of the story I realised why the Order was created in the first place so my emotions switched some what but that’s a good sign of excellent story writing.

I also enjoyed the passages from the Holy Writ that talk of the sainted Palantines battling devils as the Holy Emperor looks on, I hope the author expands the lore in future books because I can’t wait to fill my head with all the history.

I only have one negative; it ended too quickly, it’s mainly because I didn’t want it to end, but I was left empty and wanting more of the book to feed my hunger for more revelations.

Overall this was brilliant story, that will keep you turning until you realise there are no pages left to turn. The magic used during the plot is interesting, and the exchanges believable and I can’t wait for a follow up but this may be a hard act to follow.